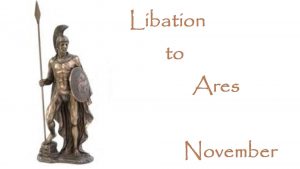 On the second Saturday of each month members of Hellenion pour a libation to one of the Olympians on the same day, from wherever they may be, with whomever may join them, around the world. In this way, whatever else we do to celebrate Hellenic occasions, we are united in doing the same action on the same day. In November, we honor Ares.

Please join Hellenion in our November libation to Ares as we reaffirm his role within our lives and seek to honor this vibrant Olympian.

From Theoi.com:
Ares was the great Olympian god of war, battlelust, civil order and manly courage. In Greek art he was depicted as either a mature, bearded warrior dressed in battle arms, or a nude beardless youth with helm and spear. Because of his lack of distinctive attributes he is often difficult to identify in classical art.

Drew Campbell, Old Stones, New Temples
http://www.theoi.com/Olympios/Ares.html
“War” according to the Stanford Encyclopedia of Philosophy: http://plato.stanford.edu/entries/war/
Military History Magazine to understand the impact of war upon civilization and our common histories and our own struggles for freedom, glory and self-realization: http://www.historynet.com/magazines/military_history