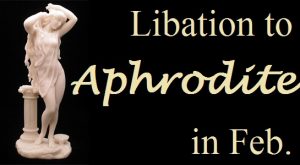 On the second Saturday of each month members of Hellenion pour a libation to one of the Olympians on the same day, from wherever they may be, with whomever may join them, around the world. In this way, whatever else we do to celebrate Hellenic occasions, we are united in doing the same action on the same day. In February, we honor Aphrodite.

Most people know Aphrodite Αφροδίτη (the “foam born”) as the Goddess of Love and Beauty. Often described in poetry as “laughter-loving,” Golden (golden-haired) Aphrodite is often portrayed as naked, but She is also the goddess of beautiful clothing and adornment; the Horai (Seasons) clothed Her with heavenly garments and put a filet of gold and a wreath of violets on Her head, earrings and necklaces of gold and jewels on Her ears and around Her neck (Homeric Hymn to Aphrodite 6, 7-11).

She is also known by the epithets “Kytherea” (after Her birthplace) and Kypros (Her home). Sometimes called mother of winged Eros (Love), Aphrodite helped to create Pandora, by pouring “grace” upon her head and “grievous desire and limb-devouring cares” (Hesiod, Works and Days, 65-66), that is, by giving her the ability to inspire desire like the Goddess Herself.

Neither human beings nor even the other Gods can resist the will and power of Aphrodite, except for the virgin Goddesses, Athena, Artemis and Hestia (Homeric Hymn to Aphrodite 5, 7-44). We humans are at Her mercy but She listens to those who pay Her due honor and call upon Her in matters of the heart (as Sappho describes in her poems). While we all desire to know and experience love, we can also experience the pain of unfulfilled love. This is all the provenance of Aphrodite. Oddly, She is also a warrior and the guardian of magistrates (Walter Burkert, Greek Religion, pp 152-156).

Aphrodite is worshiped with incense and, in antiquity, also with offerings of doves. Since February is often seen as a month to celebrate love, the libation this month can be dedicated to Aphrodite’s aspect as patroness of love. Offer her incense and flowers (because of her association with the garden) and, of course, chocolate. Wear wreaths of myrtle and flowers and share wine with others.

Devotional activities for Aphrodite and Eros

Watch the video of the 2018 libation by Apple Blossom Proto-Demos.