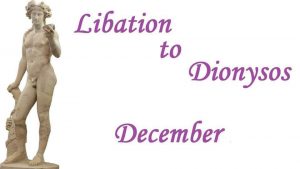 On the second Saturday of each month members of Hellenion pour a libation to one of the Olympians on the same day, from wherever they may be, with whomever may join them, around the world. In this way, whatever else we do to celebrate Hellenic occasions, we are united in doing the same action on the same day. In December, we honor Dionysos.

Join Hellenion to worship Dionysos, the young bull, son of Zeus to honor him in his birth month and celebrate his influence within our lives and within all living manifestations of nature.

From Theoi.com:
Dionysos was the great Olympian god of wine, vegetation, pleasure and festivity. He was depicted as either an older bearded god or a pretty effeminate, long-haired youth. His attributes included the thyrsos (a pine-cone tipped staff), drinking cup, leopard and fruiting vine. He was usually accompanied by a troop of Satyrs and Mainades (female devotees or nymphs).