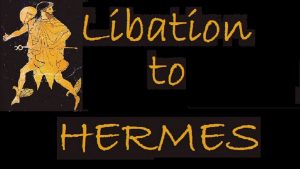 On the second Saturday of each month members of Hellenion pour a libation to one of the Olympians on the same day, from wherever they may be, with whomever may join them, around the world. In this way, whatever else we do to celebrate Hellenic occasions, we are united in doing the same action on the same day. In August, we honor Hermes.

From Theoi.com:
HERMES was the great Olympian God of animal husbandry, roads, travel, hospitality, heralds, diplomacy, trade, thievery, language, writing, persuasion, cunning wiles, athletic contests, gymnasiums, astronomy, and astrology. He was also the personal agent and herald of Zeus, the king of the gods. Hermes was depicted as either a handsome and athletic, beardless youth, or as an older bearded man. His attributes included the herald’s wand or kerykeion (Latin caduceus), winged boots, and sometimes a winged traveler’s cap and chlamys cloak.

Contemporary Poetry and Music
Homeric Hymn to Hestia and Hermes, sung and spoken

Watch the video of the 2017 Libation to Hermes by the Delmarva Nikephoros Proto-Demos.