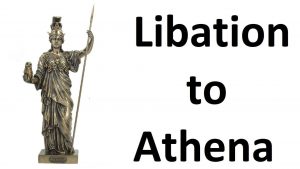 On the second Saturday of each month members of Hellenion pour a libation to one of the Olympians on the same day, from wherever they may be, with whomever may join them, around the world. In this way, whatever else we do to celebrate Hellenic occasions, we are united in doing the same action on the same day. In July, we honor Athena.

From Theoi.com:
Athena was the great Olympian goddess of wise counsel, war, the defense of towns, heroic endeavor, weaving, pottery and other crafts. She was depicted crowned with a crested helm, armed with shield and spear, and wearing the snake-trimmed aigis cloak wrapped around her breast and arm, adorned with the monstrous head of the Gorgon.