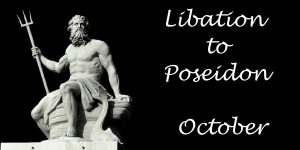 On the second Saturday of each month members of Hellenion pour a libation to one of the Olympians on the same day, from wherever they may be, with whomever may join them, around the world. In this way, whatever else we do to celebrate Hellenic occasions, we are united in doing the same action on the same day. In October, we honor Poseidon.

From Theoi.com:
Poseidon was the great Olympian God of the sea, rivers, flood and drought, earthquakes, and horses.
He was depicted as a mature man of sturdy build with a dark beard, and holding a trident.

XXII. To Poseidon
I begin to sing about Poseidon, the great god, mover of the earth and fruitless sea,
god of the deep who is also lord of Helicon and wide Aegae.
A two-fold office the gods allotted you, O Shaker of the Earth,
to be a tamer of horses and a saviour of ships!
Hail, Poseidon, Holder of the Earth, dark-haired lord!
O blessed one, be kindly in heart and help those who voyage in ships!

We also have beautiful modern hymns written by members, which can be found here.