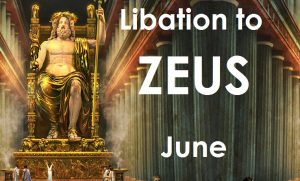 On the second Saturday of each month members of Hellenion pour a libation to one of the Olympians on the same day, from wherever they may be, with whomever may join them, around the world. In this way, whatever else we do to celebrate Hellenic occasions, we are united in doing the same action on the same day. In June, we honor Zeus.

From Theoi.com:
Zeus was the king of the gods, the god of sky and weather, law, order and fate. He was depicted as a regal man, mature with sturdy figure and dark beard. His usual attributes were a lightning bolt, royal sceptre and eagle.

Watch the video of the 2017 libation by Apple Blossom Proto-Demos.